Emanating from two pentagrams on the two walls of the art space, the complex symbolism of these signs radiates through the exhibition space. Materialized as rubber bands, the beams are reflected by the ceiling, becoming signifiers of cultural symbols.
This creates a kind of room-in-room, a double circle with a loudspeaker in its middle, from which a quiet voice can be heard.
But disturbances, concentrations and nervous tangles are also present in this semantic arena. Not only knots, but also a complex referential system a revealed; as we know from Alfred Adler’s study “On the Nervous Character,” disquiet is also a source of creativity.

There is a second audio source in front of the wall with the red symbol, which seems to emerge from a red text cloud. The text cloud entails a critical reflection of our culture: in this case, quotations from Nietzsche’s Götzendämmerung (Twilight of the Idols) (dark red) and excerpts from Adler’s individual psychological study Über den nervösen Charakter (On the Nervous Character) (light red).

How does a cultural space come to be? What are the contingencies for creative production? In the audible texts, we are confronted with individual cultural experiences, such as childhood memories and self-ruminations. Here is where the individual and cultural backgrounds come full circle.

A red thread has infiltrated itself into the corona surrounding the black symbol. It has left the beams’ path and is caught on a pillar of this cultural and art space. If one is positioned so that the knot is visible, the red thread may be seen to open up the illusory space into the third dimension. Behind this, a man appears to balance along a red floor line on the wall as he enters the room, encompassed by the clouds of his thoughts.
But the red thread is severed: the hold it has on the architectural detail of the supporting pillar is provisional.

The color of the overall installation references the triad of the German flag: black and red thread, on which hang golden, laser cut symbols that have visually influenced our cultural understanding. These include the Star of David, the pentagram, the sun cross, the peace sign, the stars of the European Union, and the like.
At night, the publically visible exhibition space is illuminated as well, transformed into a symbolic starry sky. 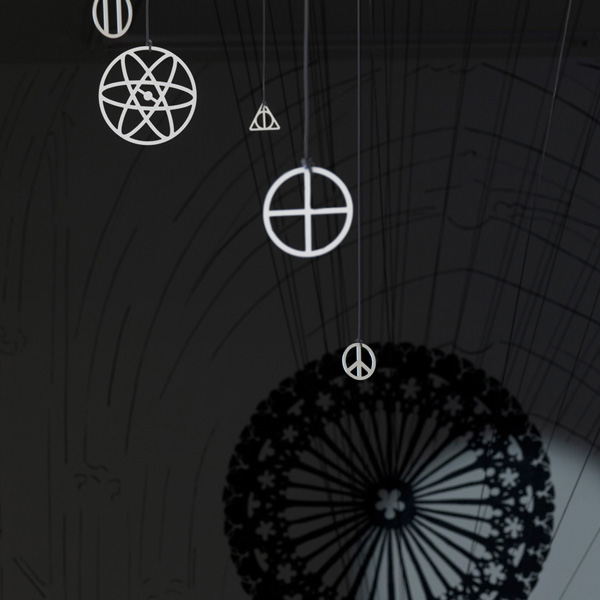 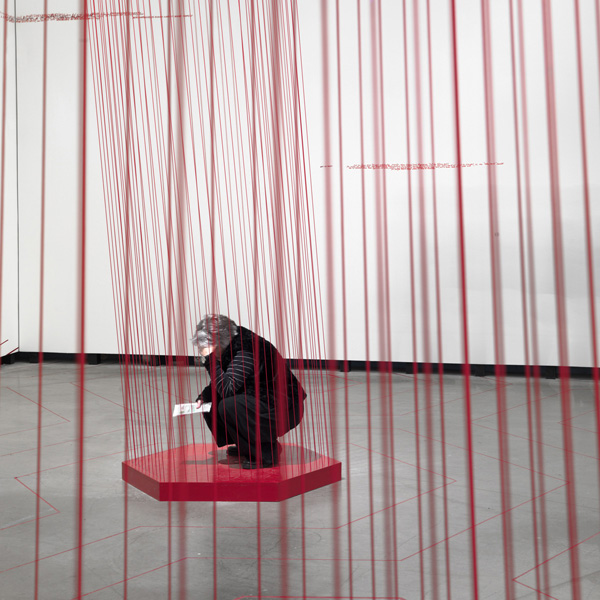 Next Project (n) Violence
We use cookies on our website to give you the most relevant experience by remembering your preferences and repeat visits. By clicking “Accept All”, you consent to the use of ALL the cookies. However, you may visit "Cookie Settings" to provide a controlled consent.
Cookie SettingsAccept All
Manage consent