Andreas Schalhorn
In the Undergrowth of Emptiness

The drawings continue the photographic situations in a modified, graphically concentrated form, so that new elements and different spaces are constructed. Here, it is also the glaring, diffuse white of the paper, which – further intensified by the empty pages of the book – increases the emptiness of the spaces, which is already present in the photographs, to an even higher degree.

In the drawings, in which the figure is for the most part captured from a certain distance, portrait-like references to Fritzi Haberlandt are clearly diminished. As a matter of principle, the actress does not function as a person, but as an agent of the simulated picture realities of Brigitte Waldach.
As already in the early drawing series of the project “sichtung rot”, Brigitte Waldach relies on subtle positionings of the female figure in almost abstract spaces that are enlivened only by a few props. Among these are, for example, architectural or scenic details, but also individual items or positings of the colour red, the meaning of which is ambivalent: a shadow as a puddle of blood, a line as a cable. In the viewers’ gaze, the figure gets directly or indirectly involved with these things – and be it only that the items change the actional and existential space of the figure with their presence. In this way, the often uncanny, even surreal seeming atmosphere that is conveyed to the viewer is increased even further – the more so as the meaning of the restrained action or contemplative pausing of the figure can not be conclusively and rationally deciphered.

In her stagings of existential isolation and distraction, Waldach keeps bringing out – as a kind of subcutaneous horror – references to images of film history. A key work for her is the horror classic “The Shining” by Stanley Kubrick, which preoccupied her in the “film sets” of her “sichtung rot”-series. With “Trailer” now, Waldach herself functions as screenplay writer, producer and cutter. The photographs made under her direction remind, not coincidentally, of film stills and – just like in a Dogma film – absolutely no artificial lighting was used.

An important element of the staging in “Trailer” are texts, text fragments, abbreviations or graffiti. They enhance (as props sui generis) the psychological charging of the figure/space situations and set a discursive keynote. Thus, Waldach uses a text already in the first picture of “Trailer” (picture 1), so that the photograph may be understood as title-page. The text fragment, which is placed with red chalk on the wall next to the female figure and refers to Ingeborg Bachmann’s novel “Malina”, makes clear that the empty rooms radically throw the figure back on her own inner conflicts. Elsewhere one finds in the medium of drawing a figure with a red speech bubble without text. On the wall in the background the concentrated lettering of a text by Jean Baudrillard (“Radical Illusion”) appears (picture 2). The last drawing of the volume in turn shows on the ground – as the figure’s basis for reflection, so to say – the telling writing “Happyend”.

The last picture of “Trailer” (picture 3), finally, a photograph, shows on the ground, directly in front of a wooden wall, only the red dress. The actress has vanished into thin air, abandoned her role – dropped out of the staging. By means of this conclusion, Waldach again stresses the fictional and the scenical quality of her “Trailer” (picture 4) which is constructed in two picture levels – and therefore ambiguous – and which so strikingly succeeds in drawing the viewer into the undergrowth of empty spaces and involving him in the oppressive mystery of both the physical and mental presence of the protagonist. A chamber piece as cineastic experience! 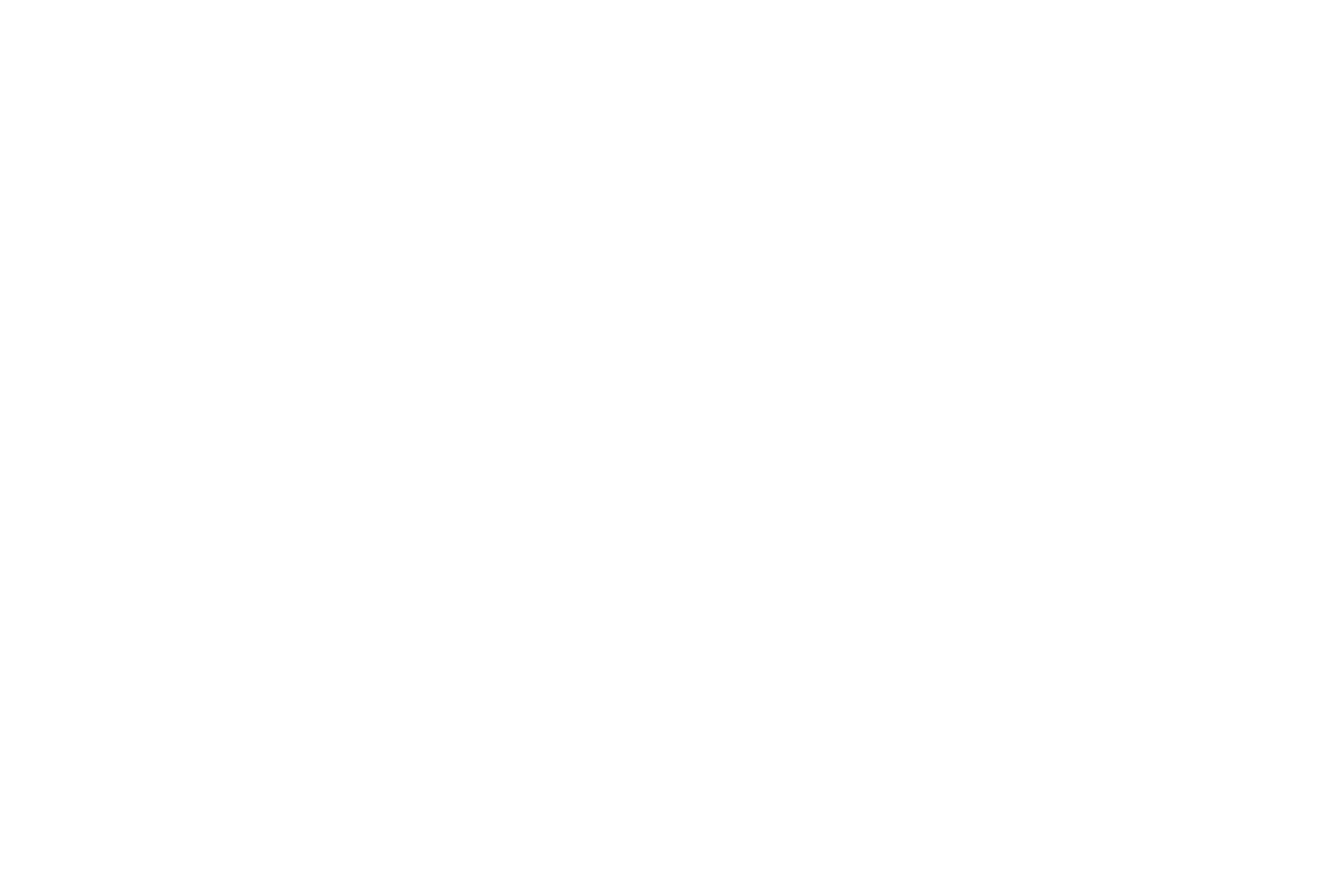 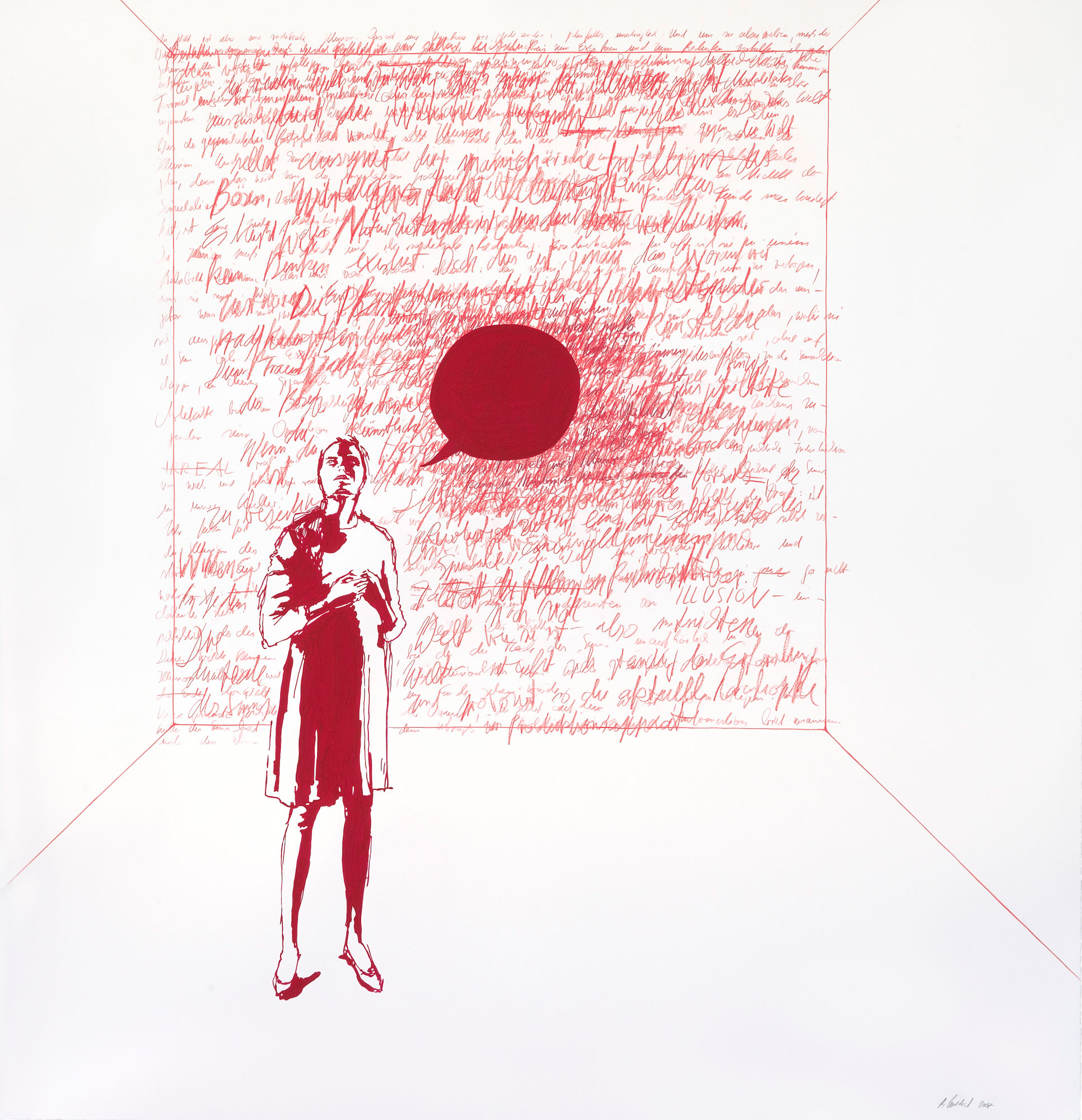 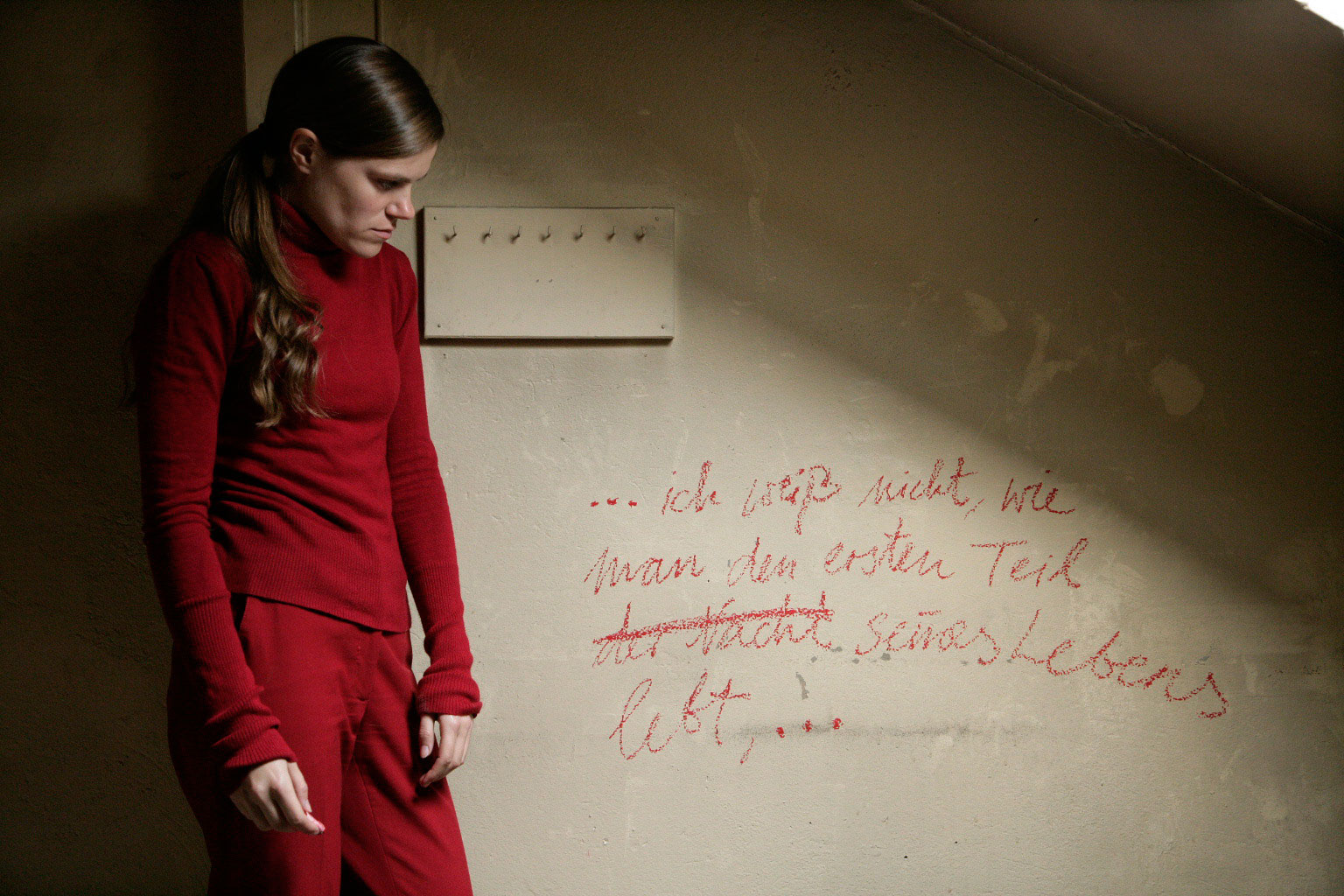 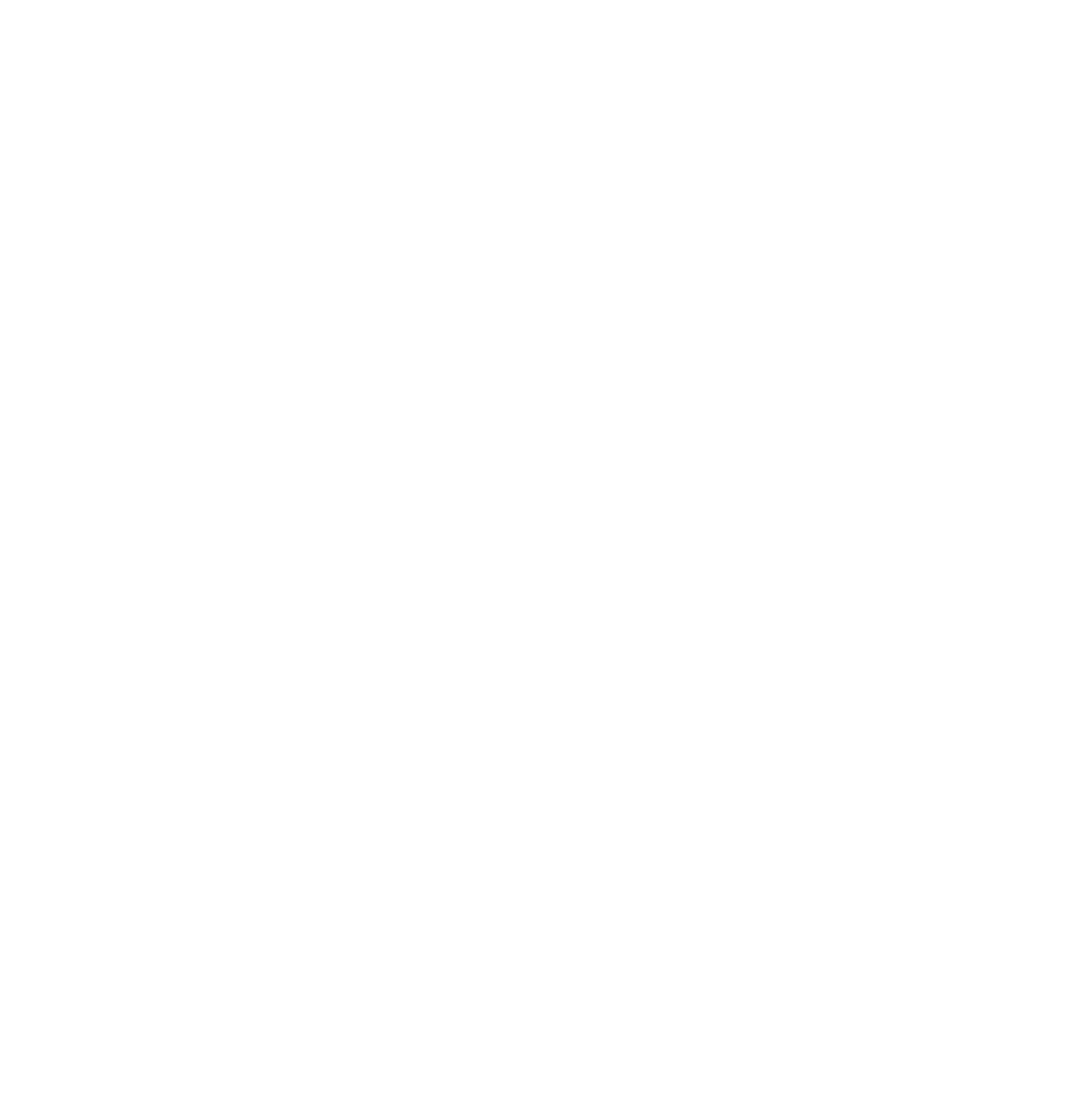 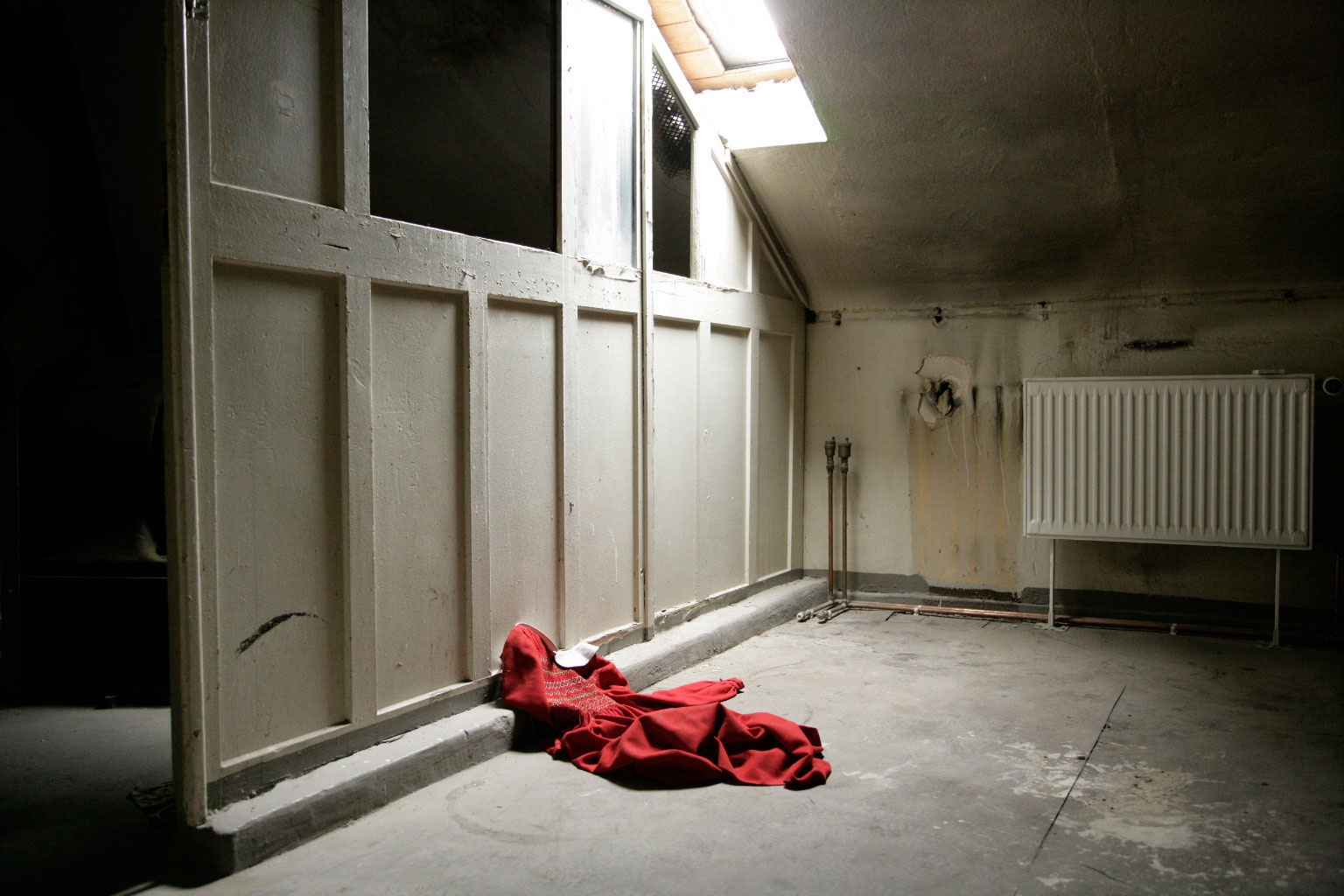 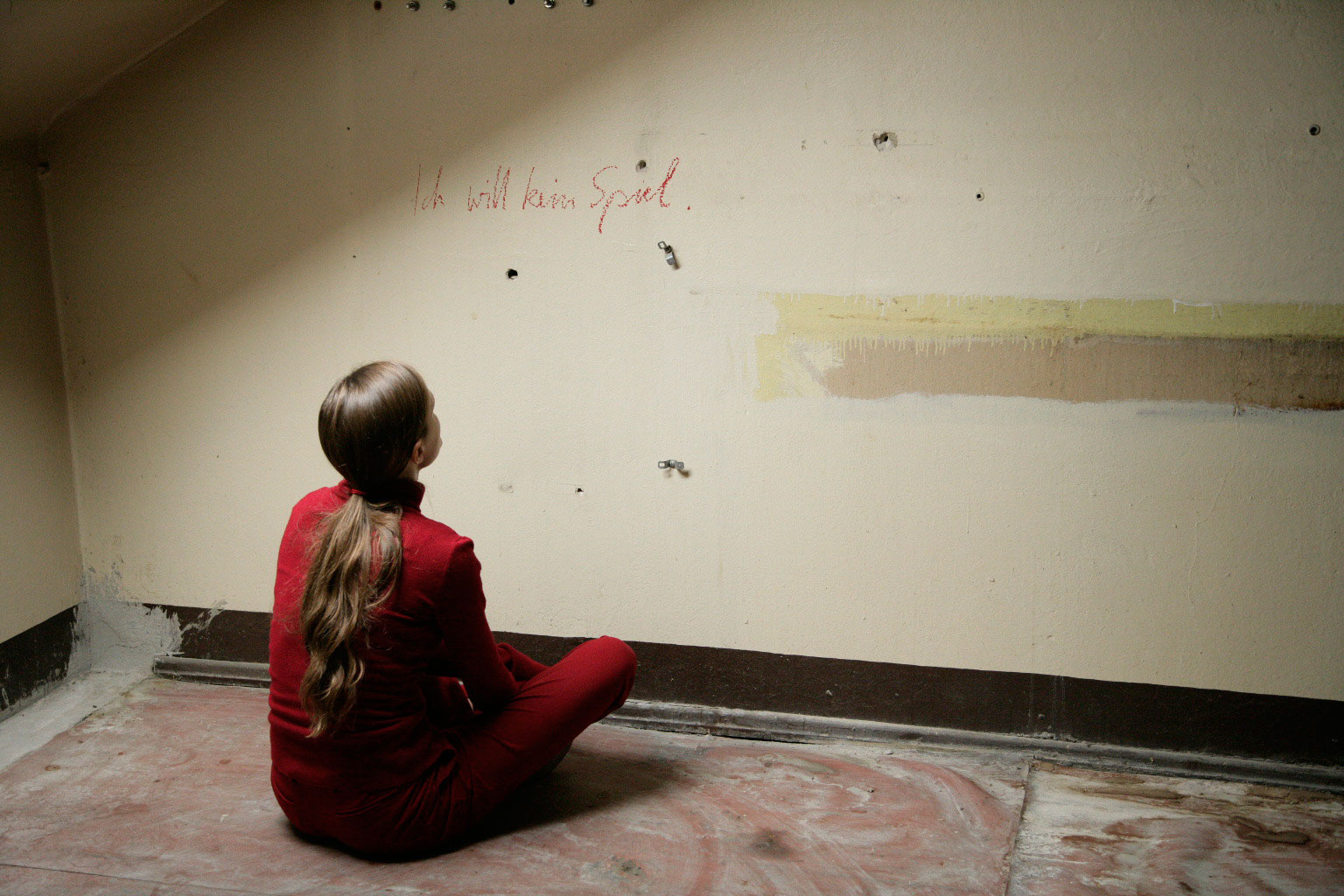 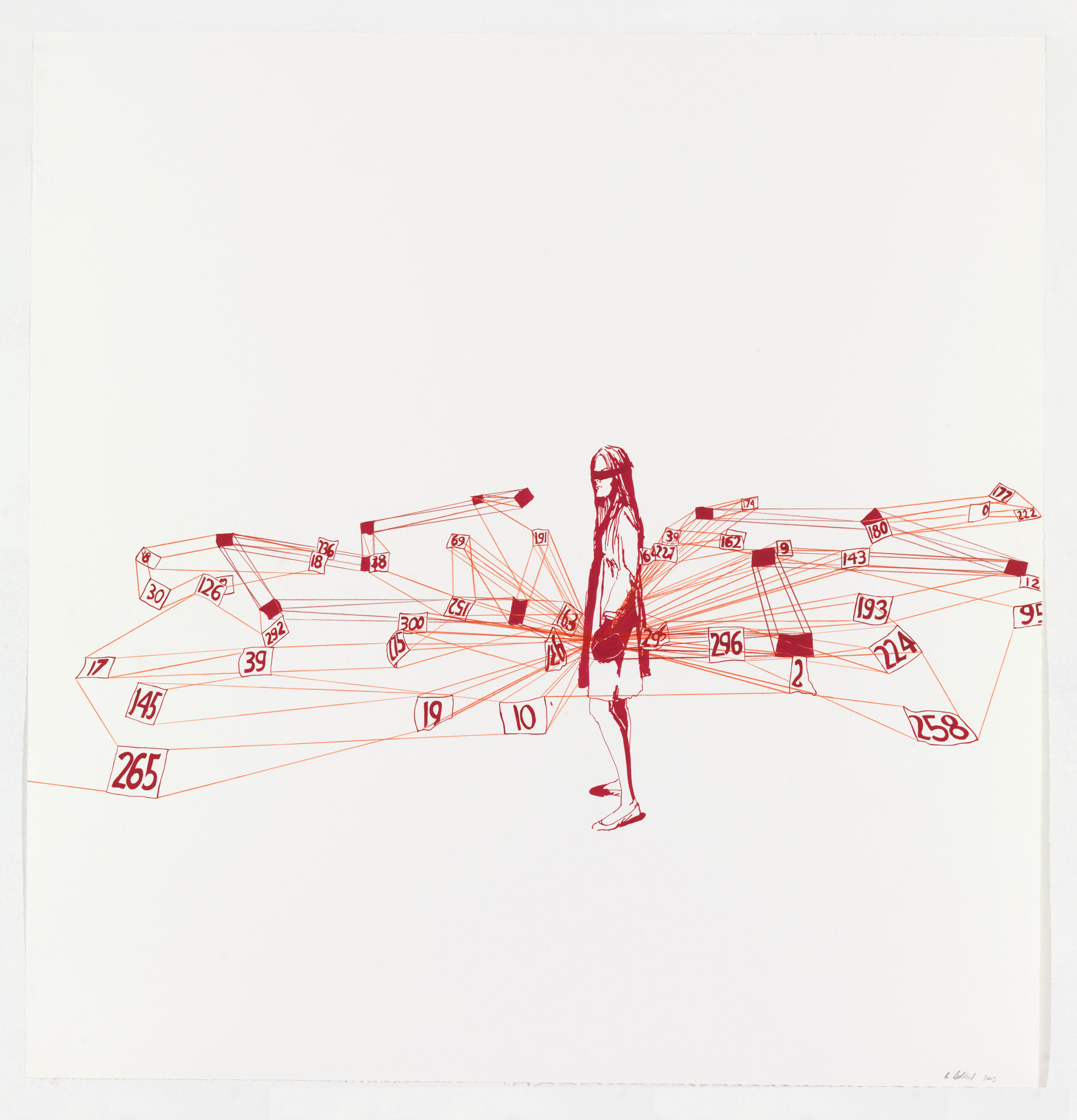 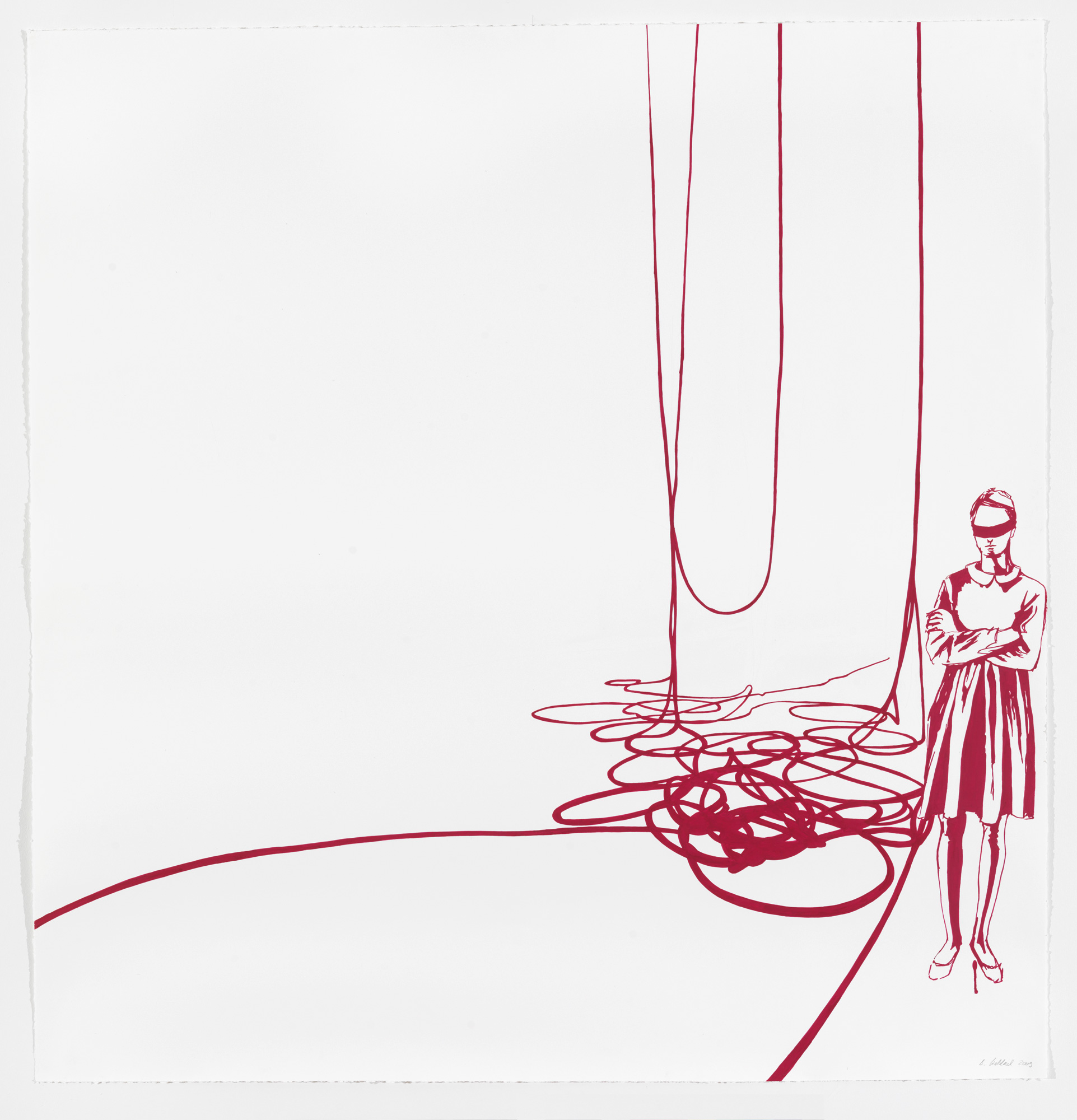 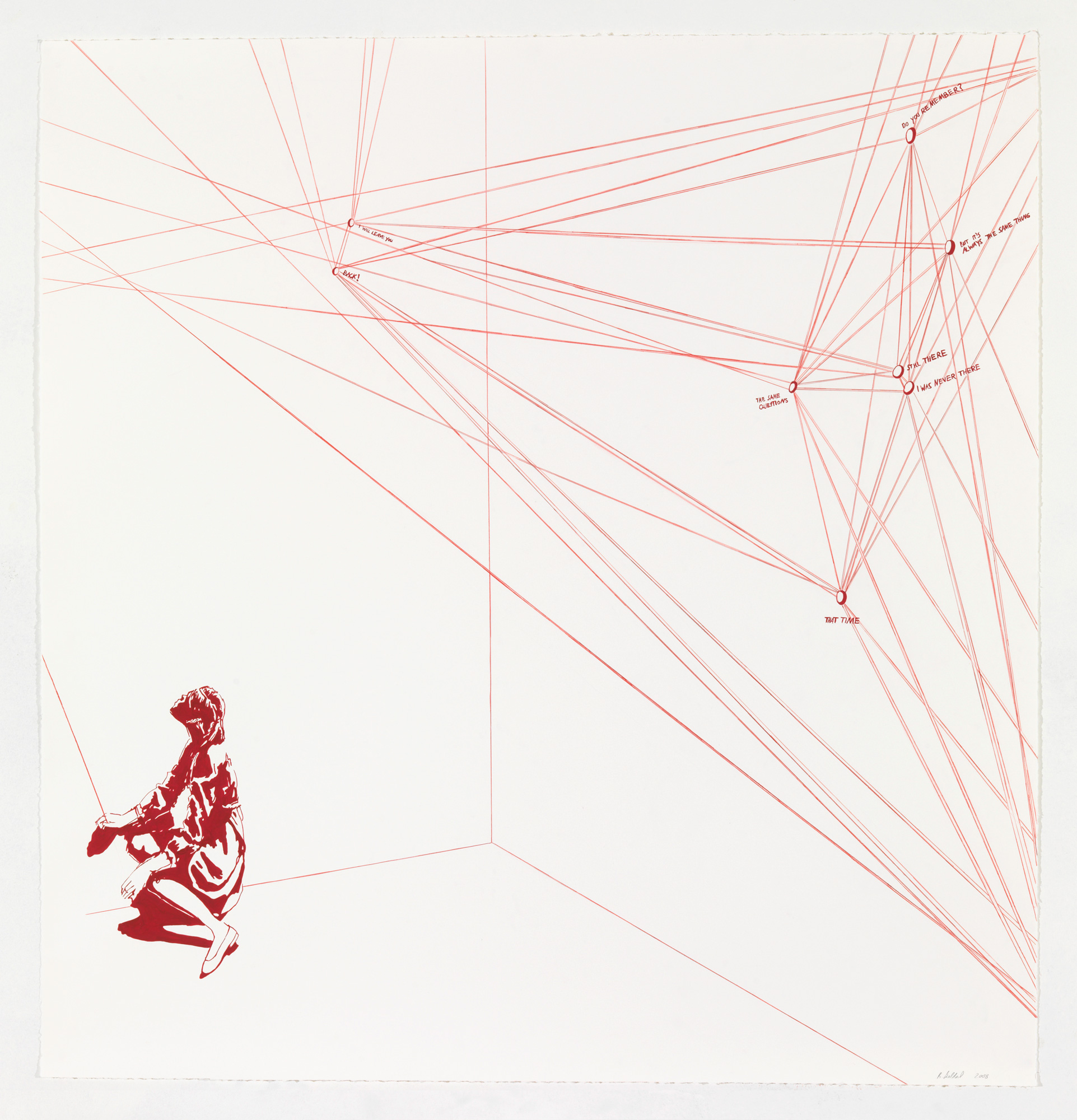 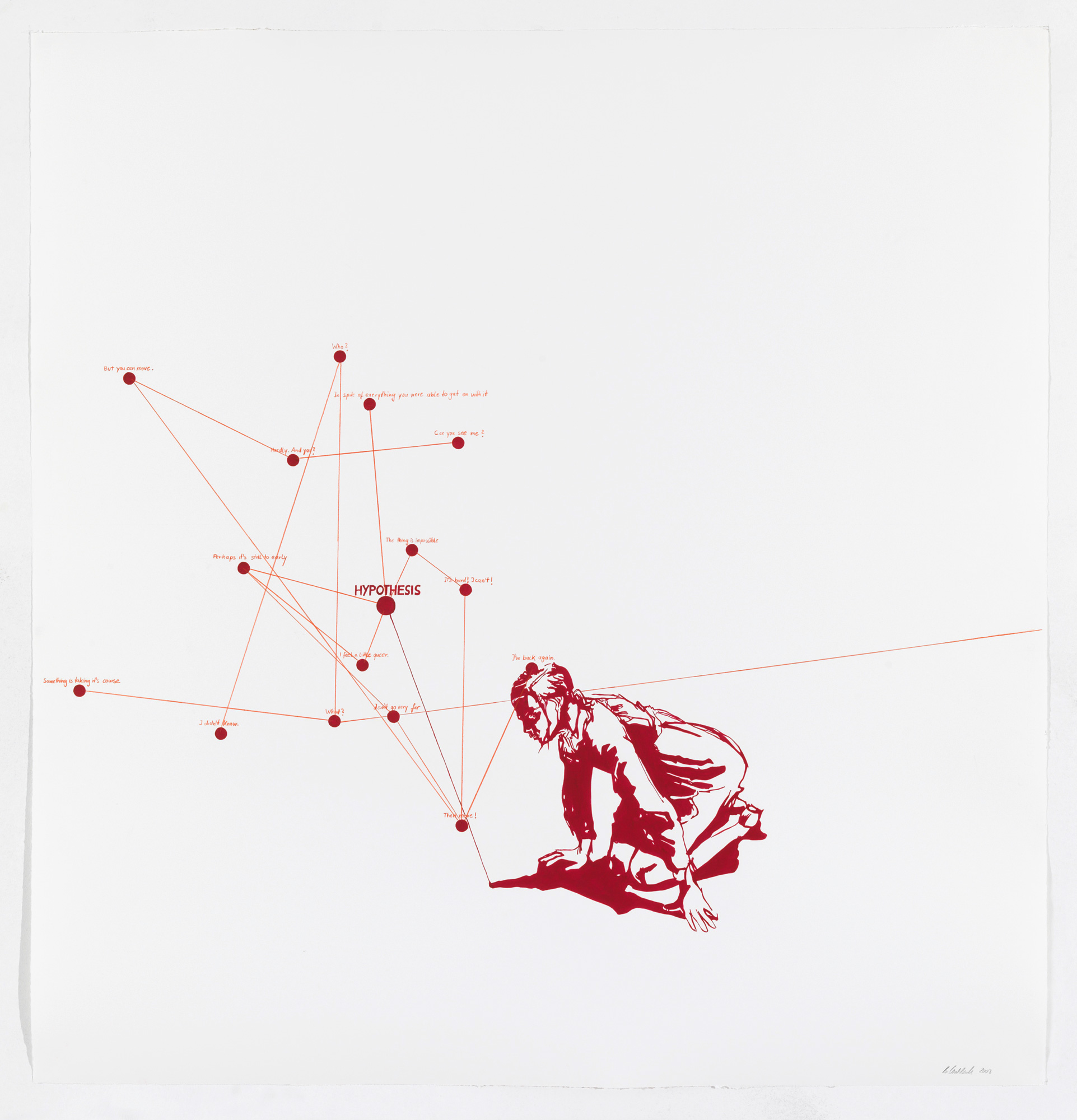 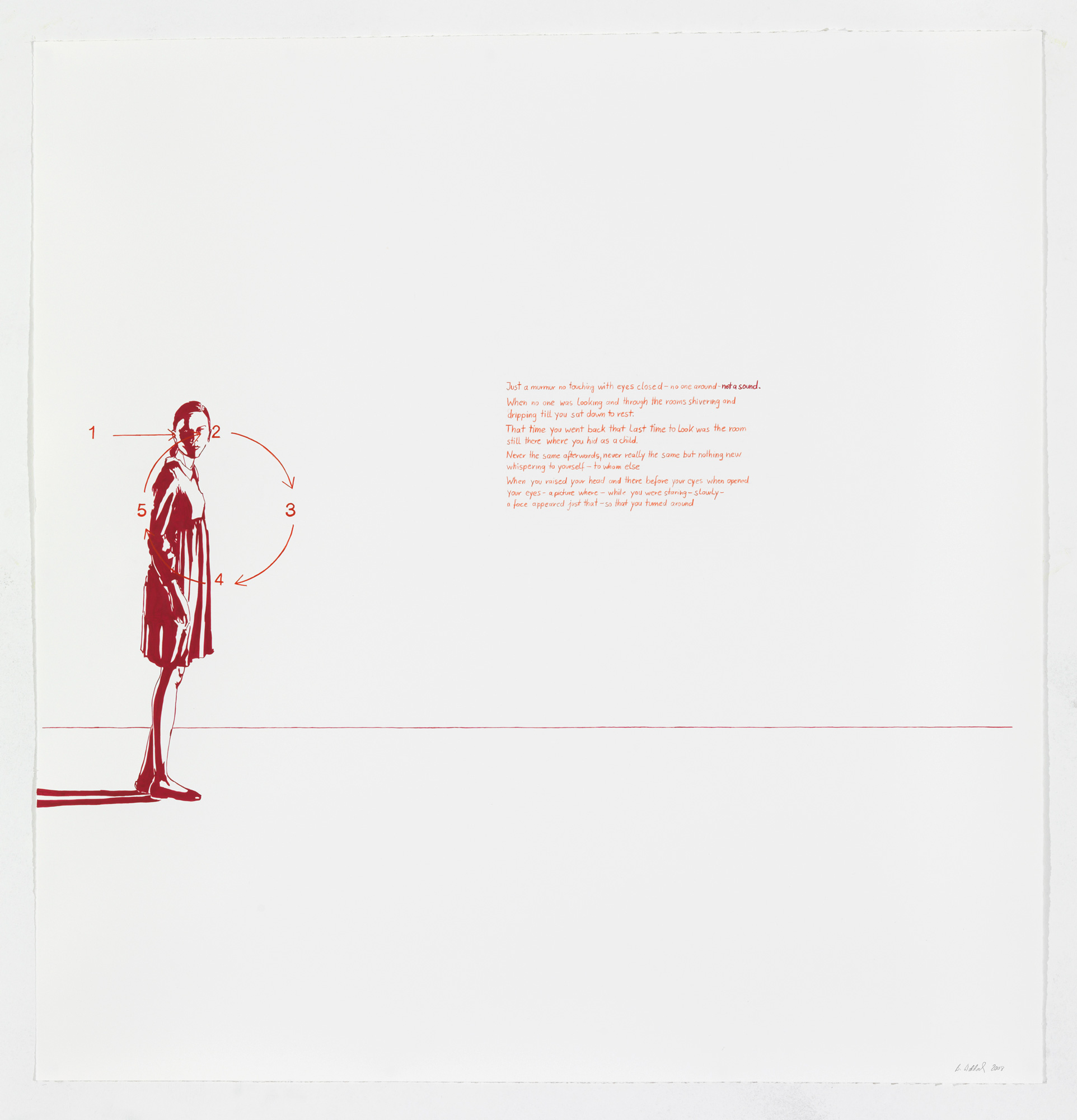 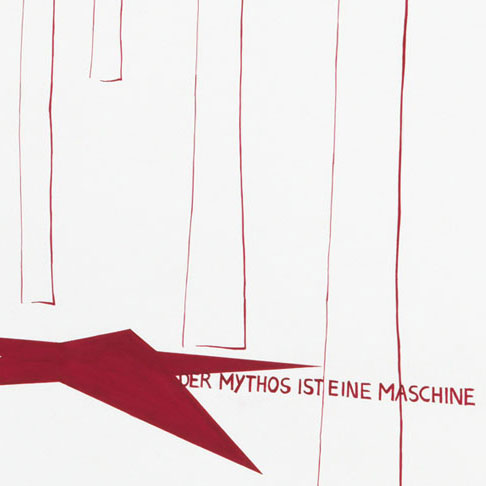