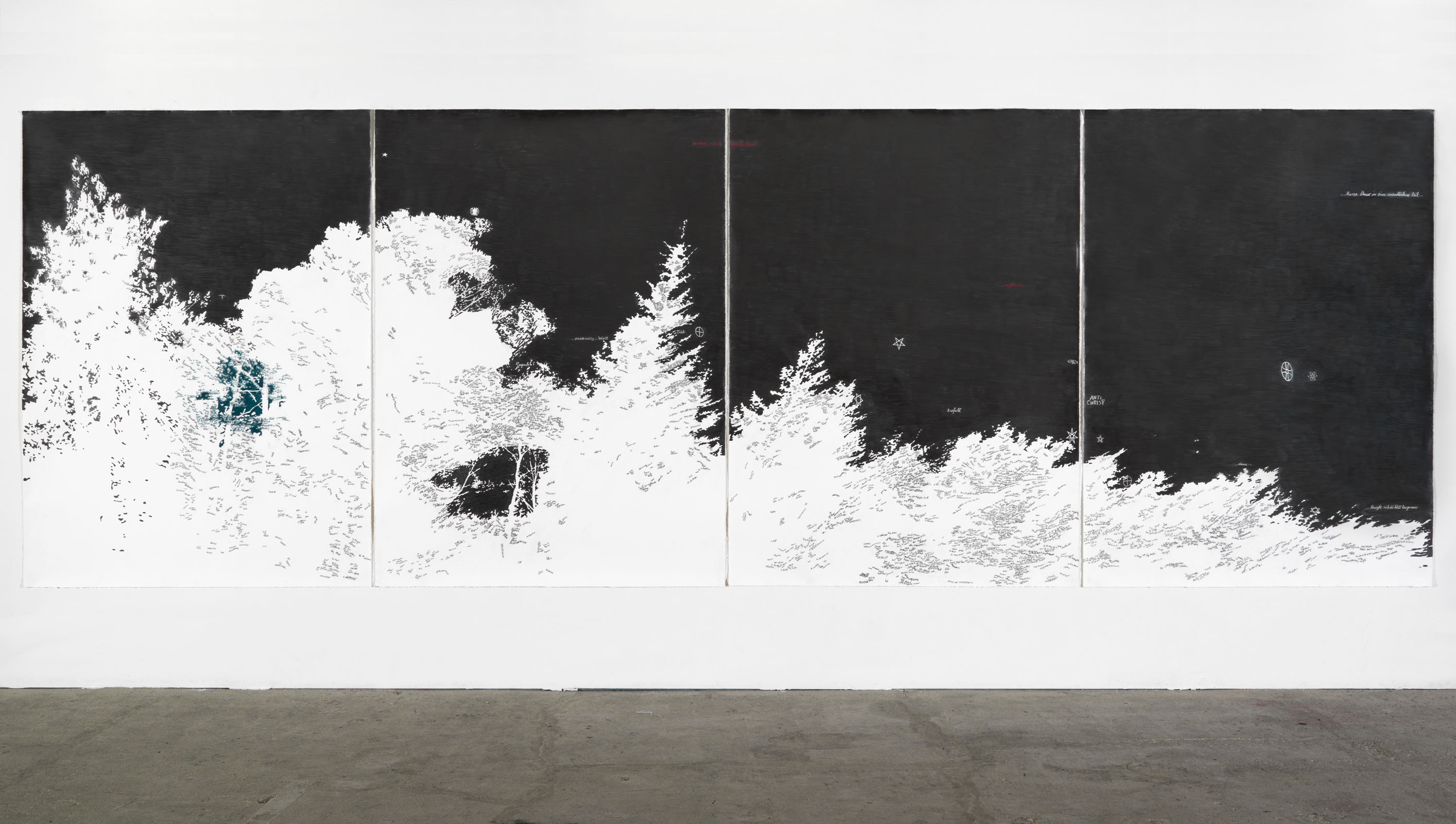 With its four framed large-scale drawings hung side-by-side, “Wald” (Forest) is the largest two-dimensional work Brigitte Waldach has ever produced. The polyptych contains various elements from her previous oeuvre and thus constitutes one of her most important works to date. The materials are paper and pencil; the motifs, drawn with words, are the crowns of trees and scattered trunks that make up the silhouette of a forest landscape. The dark shape of the sky is shaded in dense gray-black, while the forest is clear and light, nearly transparent. The contours are precise and appear almost cut out; overall, it looks like a map of craggy islands in a rough sea. Upon closer inspection, the foliage of the fragile trees turns out to be a fine composition of words and sentence fragments that Waldach wrote onto the paper after reading selected texts, during hours of free association.

Here, her text sources are poems by Heiner Müller, philosophical writings by Walter Benjamin, Friedrich Nietzsche, and Slavoj Žižek, short stories by David Foster Wallace, and the cutting reports of Ferdinand von Schirach. The texts, which she often changes, become image motifs integrated in the pictorial space. Waldach regards her adaptations as conceptual considerations during which the various different characters in a narrative merge into one, and male protagonists can turn into female figures and vice-versa. Writing is no longer information transporting content, but becomes a representative form in and of itself. What is interesting is that the various different literary forms are treated with different formal means. Thus, on the left side of the drawing complex, poetry is used in a stricter stanza form, while on the right prose is carried out in longer fluid sentences, even overlapping in parts. It’s also interesting that the forest changes its form with the transition from one literary form to another. The sharp contours and pointed treetops suddenly become flat, melt into an extended wave out of which the upper leaves spray, like foam.

For Waldach, the forest is a free space in which nature becomes a myth. She occupies this space with an array of possibilities inscribed with individual words, composed quotes, and culturally traditional symbols. In contrast with her older works, there are no longer any people present in this “forest.” Waldach has made concrete here her otherwise futile attempt to “shake off” (as she phrased it once) the figure as a drawn motif. In an explosive eruption of text, the viewer (and of course reader) is confronted with the (linguistic) traces of human existence on another, highly intense level.
New images emerge from the reading of short stories, for instance those of the American author David Foster Wallace. In this case, evil lurks in the woods, women are in danger of being attacked by psychopaths, and the person who (un)willingly enters the forest is teetering on the edge of the abyss. But Waldach also investigates the forest as a place of guilt, as the criminal defense lawyer Ferdinand von Schirach describes; in the forest, an ineradicable conscience turns a short spell into an interminable length of time; the world moves more slowly in the woods.
The forest seems a bit less threatening when Waldach elevates it to the cathedral and turns it into a cultural vessel of historical phenomena and all kinds of memories. Her oversized drawing is adorned with various symbols of cultic and cultural awareness: the True Cross, pentagram, Star of David, atomic molecule, and German eagle. These signs have already appeared in her other works on paper, especially the room drawings that can be walked through.

The impenetrable black-gray surface of the sky gives the image a peculiar positive-negative effect comparable to a photographic negative. The pencil shading in the upper part of the picture absorbs light and evokes an endless (outer) space on a clear night. Beneath it, the white texture of a dream forest emerges and slowly dissolves. The sky, otherwise so open, lies dark and heavy on the blindingly bright forest, from which all threats and fears seem to have disappeared. References to Romanticism are evoked. 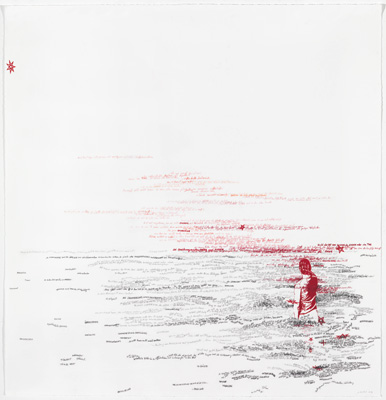 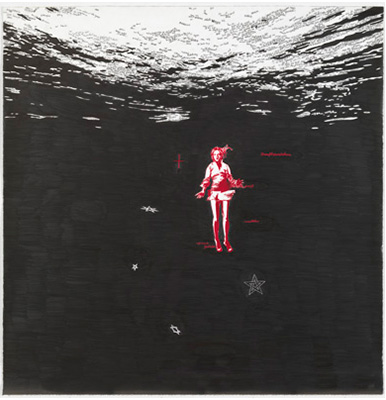